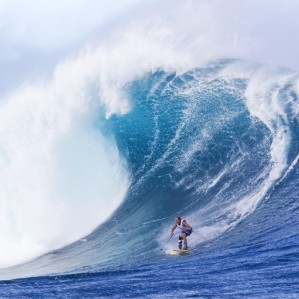 It’s pretty startling how sports have common strings. For example, surfing and skiing are both sports that rely on balance over terrain that changes. Of course, the lean, masculine muscles can’t be missed as being part of the overall picture, though that’s not where the similarity ends. Neither can you ignore leg strength!

The spandex outfit, ski gloves, boots, and goggles may be another giveaway as being par for the course for skiing, and what about the skis? These don’t look up to the task of taking on the kind of slopes facing Chuck Patterson as he heads toward his playground.

The slopes up on mountains are bad enough, with speeds on a slalom reaching new heights, but when the actual mountain under your legs moves too, now that’s awe inspiring. This is the mountain to beat all and is known simply as the Jaws. It’s the same principle in some ways though with totally opposite goals. A mountain skier wants to get to the bottom, while the Jaws surfer depends on this not happening.

How the story goes

Based off the Hawaiian coastline, Peʻahi as it was originally named, gained in both reputation and potential in the 1980s and has since been used as the backdrop to the James Bond movie, Die Another Day, though even James Bond employed a stunt man to mount the 60 foot waves, thought to be caused by an underwater ridge.

As Chuck Patterson donned his ski wear, could even he have anticipated the reason Pe’ahi, or simply “wave” in the Hawaiian language, got its nickname of Jaws way back in the mid-1970s? He certainly looked equipped, with full ski regalia and ski stick as well, which appear to have helped with balance and stability.

It all starts at something

His impressive Spandex outfit, sporting zebra skin stripes, had the whiteness to reflect the sunlight normally caught on the ski slopes, and it makes an interesting contrast to see the white against the devilish blue of the Jaws slope.

Recorded for the movie, Visions, by Willy Bogner, what viewers see is a contrast between his other movie on snow surfing which placed your typical surf heroes onto a mountain of real snow, whilst Chuck Patterson, in full snow regalia faced 60-foot mountains of moving water.

It’s interesting to listen to Willy Bogner in interview and to see how the sports equipment and clothing evolved, using the business mind and background of his father, coupled with the female style of his mother. The introduction of stretch clothing for skiing has indeed brought many women to the sport.

However, the zebra striped outfit donned by Chuck, to take on skiing of another nature, may open up more avenues for developing a whole new range of surf wear possibilities. Whatever the outcome of the film, and whatever the original intentions were of the Willy Bogner movie, “Visions,” Chuck Patterson pulls it off with panache, showing his own skills pitted against nature.

With both mountain and sea, snow and surf, all having one root common denominator of natural environments, it isn’t that hard to see the subtle connection and to thrill in the end result.

Join the world of Bogner